Knowledge & Passion to Make a Positive Impact on the World.

* Don’t forget that mid May is an ideal season to visit Athens, Greece.

Athens, the capital of Greece is a lively, and cosmopolitan city harmoniously reconciling the past and the present. In Athens you can find state-of-the art conference facilities, a vibrant entertainment scene, as well as thriving gastronomic scene. Monuments and world-class museums can be found all around the city centre, side-by-side with contemporary constructions. In addition, Athens is famous for its rich cultural life, its lively nightlife, its highly distinguished Mediterranean cuisine and the world-class cultural heritage attractions.

“Being in Athens, one of the World’s safest city, you’re midway between Europe, Asia, and Africa”

* WTC is organized for the first time in Greece

The Greek Tunnelling Society is a dynamic society, having as goals to bring together engineers of all disciplines,
geologists, researchers, manufacturers and all other relevant scientists involved with the underground industry  and to disseminate information in Greece regarding the latest technological developments related to underground engineering. Moreover, it provides the connecting means with other countries through the International Tunnelling Association (ITA).

The Megaron Athens International Conference Centre is one of the finest and most technologically advanced conference venues in Europe. Situated in the city centre yet surrounded by its own extensive landscaped gardens, the Megaron offers a stunning environment, exceptional aesthetics, cutting-edge technology and unrivalled client service. The congress venue can accommodate up to 6000 delegates and offers more than 10.000m2 indoor exhibition space.

“MEGARON – A Masterpiece in the city center of Athens“

As Athens is a highly visited city, there is a great variety of hotels and hostels centrally located, with a range of costs to accommodate any visitor. A large number of hotels of various categories are located in proximity to the congress venue. Hilton Athens Hotel, is located close to the congress venue (11 min. walking distance – 750 meters), and it will be the headquarter hotel.

The Greek Tunnelling Society, hereby confirms  compliance with ITA-AITES Statutes and By-Laws and Annex no 1.

As Mayor of Athens, I pledge my full support for Athens to host the ITA – AITES World Tunnel Congress. Athens is famous for telling stories about humanity. They are often found deep below the ground, in almost every building foundation and tunnel. Our experts work passionately and deliberately every day to create innovative methods for infrastructure development that respect our culture heritage while continuing to build a modern and beautiful city. Our resolve to face these challenges has been paying off. Athens has become a leading global destination for international meetings.

Conferences, company meetings, exhibitions and incentive travel establish the core of the local tourism industry and a strategic priority for the City of Athens. We have built world-class infrastructure and conference services that will ensure an efficient and productive experience for your members. Our spectacular conference venues and learning opportunities will inspire them to face challenges with curiosity and excitement while giving them life-long memories. In this direction, the City of Athens through This is Athens – Convention & Visitors Bureau is committed to providing assistance and full support to guarantee the success of the most demanding of events. I believe the Congress will be a wonderful opportunity for all of us to learn and share our hopes for the future. I am excited to welcome you to Athens.

The Greek Tunneling Society (GTS) invites you to the 49th ITA-AITES General Assembly and the 2023 World Tunnel Congress in Athens, Greece, from the 12th to the 18th May 2023.

Athens, a vibrant modern European capital situated by the Aegean Sea, is an ideal location for international conferences.

The city of myths, monuments, gods and ancient glory could offer unique experiences for the distinguished delegates of the ITA family. Contributions from all parties of the supply chain of the underground industry i.e. consultants, contractors, software producers, machine / equipment manufacturers, investors as well as operators and clients are welcome to attend since they will be able to exchange knowledge, promote their expertise / knowhow and define future needs.

The GTS has been the national representative of Greece in ITA-AITES since its creation 25 years ago. The Greek Tunneling Society has been continuously participating in the ITA-AITES activities (General Assemblies, Working Groups etc), whereas the Greek Young Members Group has been actively involved on the initiatives for the networking of young tunneling professionals and students as well as on bridging the gap between generations of tunnellers.

During the last 4-5 years Greece experiences an explosive recommencement of tunnel construction activities just after country’s recovery from the economic crisis. Some 65km of, total single tube length, tunnels were recently completed along the four motorway concession projects and approximately 20km long tunnels including 24 Metro Stations in total are near completion, both for the new Athens Metro line 3 and for the Thessaloniki Metro. Moreover, numerous underground projects are planned to commence shortly within the complex geological environment of the country.

The organization of WTC in Athens will greatly promote the interests of the ITA in the Balkan region where, despite the length of the coastline (Greece alone is classified as the 11th country worldwide in terms of length and 2nd country worldwide in terms of coastal length vs country’s land area ratio), the mountainous environment of the countries as well as the rapid urbanization necessitates the construction of longer – deeper – larger – safer – smart – sustainable and green underground projects.

Greece has been for many millennia the cross road for civilizations. This has left a rich inheritance of ancient monuments and artifacts of unparalleled beauty. Having a magnificent natural environment and surrounded by the “deep blue” Mediterranean Sea, it provides perfect conditions for recreation. Mid May is an ideal season to visit Greece. While the city of Athens is not that crowded by Tourists, the climate is warm enough for enjoying outdoors and the beaches.

Being in Athens, one of the World’s safest city, you’re midway between Europe, Asia, and Africa; constituting an easily accessible destination city from all over the world. The proposed Venue of the Congress ”Megaron Athens International Conference Centre” offers a stunning environment with exceptional aesthetics, but also cutting edge technology. Moreover, it is situated in the city Centre, next to the “Megaron” Metro Station, which enables easy access from all over the city.

Athens provides abundant modern hotel accommodation and boasting an excellent METRO system. It presents great opportunities for sightseeing, excursions and technical visits. Numerous hotels are within walking distance from the convention centre, located in central Athens, as well as from other places of interest.

We are committed to organize a successful and memorable ITA-AITES World Tunnel Congress 2023 and offer what has been known as a traditional Greek hospitality.

Ioannis Fikiris
Chair of the Organizing Committee for WTC2023 / ATHENS

President of the Greek Tunnelling Society

Eupalinos Tunnel – First Tunnel to be excavated simultaneously from both ends in the 6th centurty B.C.

Greek Summer is a State of Mind

KNOWLEDGE & PASSION TO MAKE A POSITIVE IMPACT ON THE WORLD

Cities, infrastructure and logistics expansion towards underground provide safe, sustainable and green solutions facilitating the transformation of millions of people’s lives into a more resilient lifestyle. A comprehensive understanding, rethinking and reshaping of the underground spaces has become even more vital and crucial in the urban transformation of future cities, where overground space will be more and more valuable. For the latter to be attained, a holistic approach is required not only in terms of spatial organization or overcoming engineering challenges, but also with regard to the establishments of policies, regulations and consideration of social factors.

WTC 2023 in Athens will highlight the multiple advantages and solutions that underground space can provide, at the prospect of a whole new era of smart technology where sophisticated “digital tools” change investigation, design, construction and operation methods and strategies rapidly. WTC 2023 will additionally provide an ideal opportunity to showcase recent innovations and the perspective of technology to further efficiently upgrade underground infrastructure assets, transforming the industry and the societies it serves.

We strongly believe that WTC2023 held in Athens (Greece) will provide a valuable opportunity and a fertile soil for the international underground society to make a literally positive impact on the world.”

The Greek Tunnelling Society (GTS), founded in 1995, is the established and official representative of Greece in the International Tunnelling Association (ITA-IATES). GTS is a non-profit body and aims to promote the key advantages of tunnels and underground structures from technical, environmental, social and economic point of view. The steering board of the GTS consists of 7 members, while the body of the GTS has more than 200 members.

The Eupalinos Tunnel is considered as one of the most important engineering achievements of antiquity. It’s a 1036m long tunnel in Samos Island, Greece, built in the 6th century BC to serve as an aqueduct.

The Eupalinos Tunnel is considered as the first underground project excavated with a geometry-based approach. The Engineer Eupalinos built a tunnel under a mountain by starting to dig, simultaneously, from two portals diametrically opposite. All applied measurements using maths and geometry are of outstanding precision.

It is estimated that 8-10 years were required to complete the project. The maximum overburden of the tunnel is ~ 170 m below the summit of the Kastro mountain and its elevation is 55m above sea level. The tunnel consists of a corridor having internal dimensions 1.80×1.80m and of a ditch 0.60m wide. The depth of the ditch ranged from 4.0m in its northern section to 8.9m in its southern one…

As ITA #TunnellingWeek comes to an end, we wish to thank you for your interest in Athens WTC2023 e-booth. Follow us on social media to stay up-to-date on the latest news about WTC2023! #Tunnellingweek #AthensWTC2023 #WTC2023 https://t.co/QY7Bhe1D8i 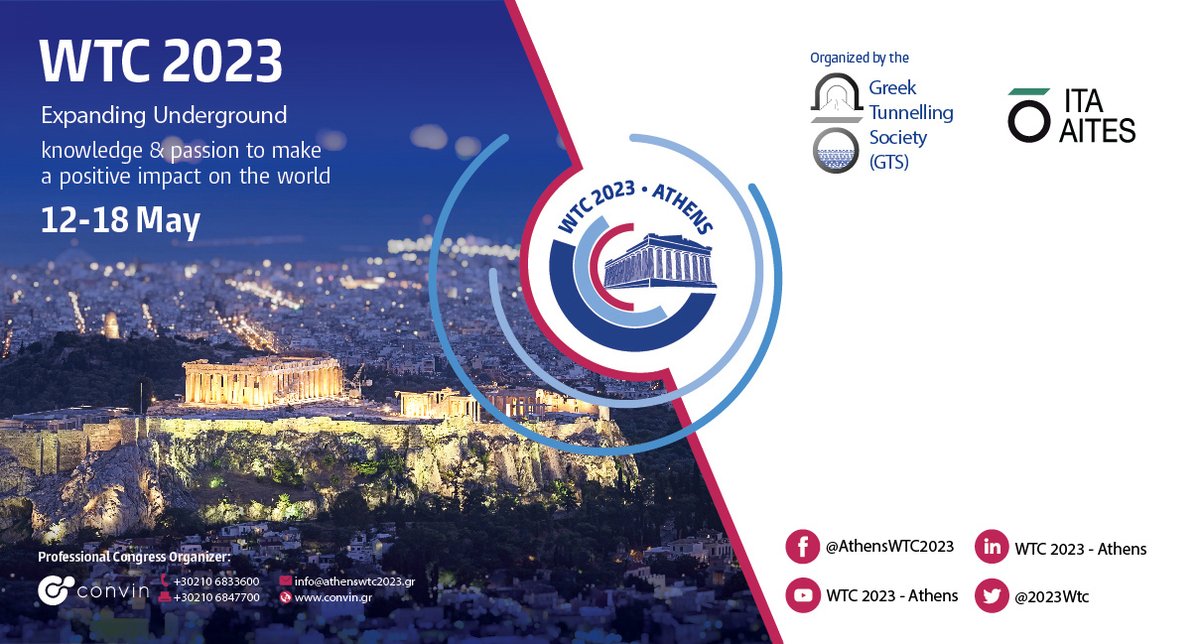 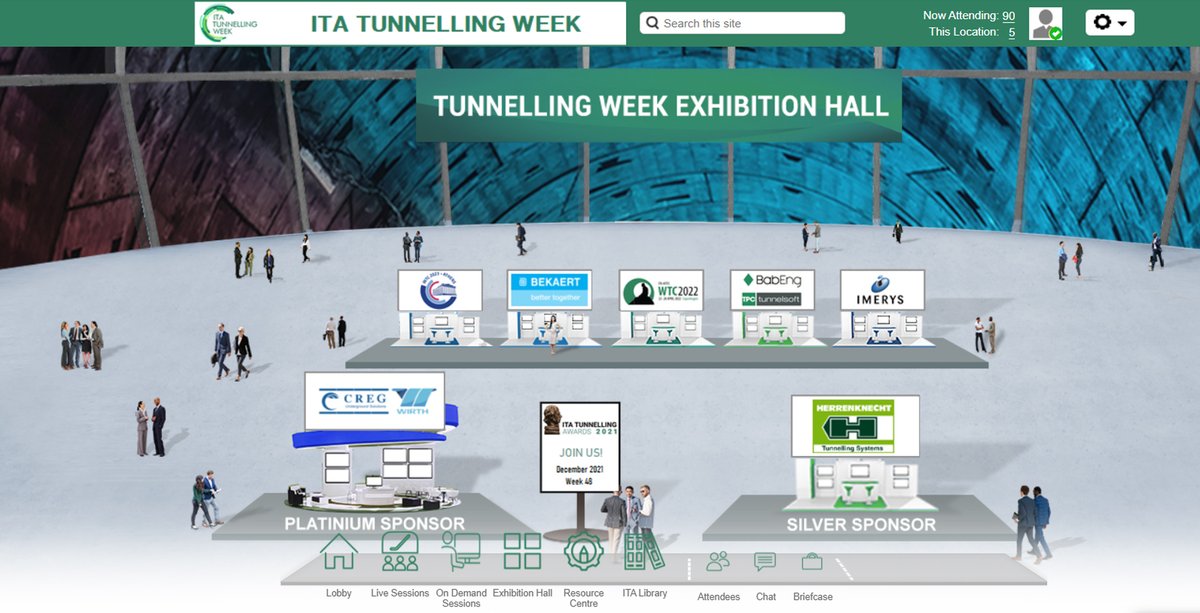 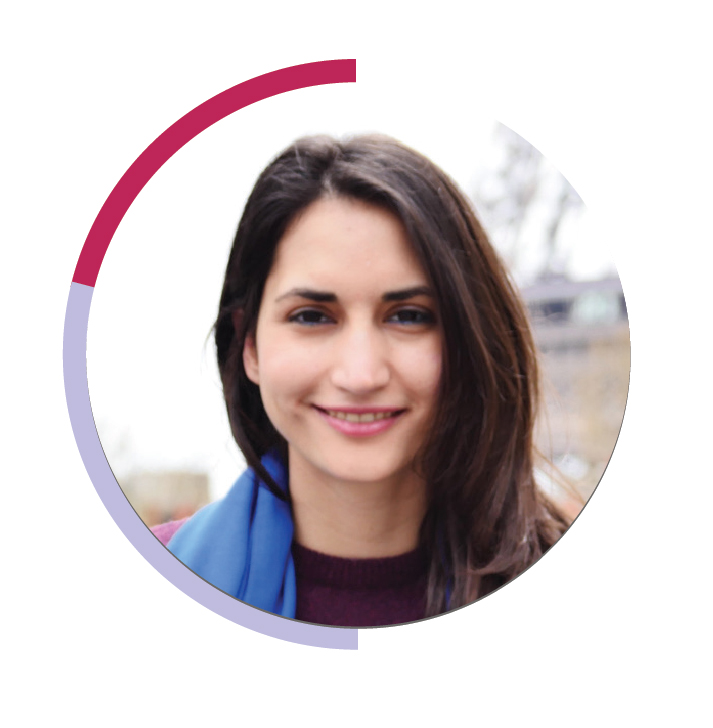